Elizabeth Saxe-Coburg-Gotha, also known as Queen Elizabeth, is monarch of the United Kingdom, as well as fifteen other Commonwealth nations.

Whilst there is no evidence suggesting she is a pedocrat, she has been associated with rather a lot of pedophiles.

One of the Queen’s former butlers, Paul Kidd, was convicted in 2008 of indecent assaults assaults against children as young as 13.

He even took one of the victims to have tea with the Queen’s mother.1

The police found nearly 20,000 images of child pornograph on his computer; it was encrypted with the password ‘Pickles’.

‘Pickles was the name of the Queen’s first dorgi dog.2

This is Rolf Harris standing in front of his portrait of Her Majesty Queen Elizabeth, painted in 2005. It was painted for her 80th birthday; the Queen was thrilled with the painting.

In 2014, Rolf would go to prison for molesting children.3

The painting, which we have featured on this website, has not been seen in public since.

Pedophile Surveyor of the Queen’s Pictures

Anthony Blunt was a member of the Cambridge Five, a group of spies working for the Soviet Union from some time in the 1930s to at least the early 1950s. He passed Venona & Enigma secrets to the Soviet Union.

Despite confessing to being a Soviet Spy in 1964, he retained his job as Surveyor of the Queen’s Pictures until 1973. He was exposed as a spy in 1979.

In addition to being a known spy, he was also a known padophile and regularly visited Elm Hurst Guest House in London.4

In this video, pedophile Jimmy Savile tells a story about taking a young girl to see the Queen’s husband, Prince Philip. 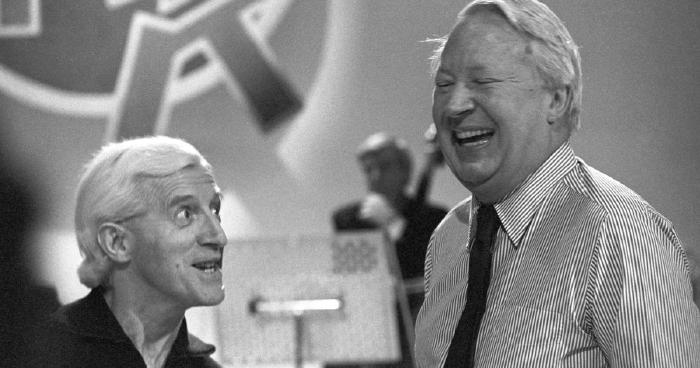 Following Edward Heath’s death, various victims came forward to say they have abused by Heath when they were children. At the conclusion of a police investigation, Chief Constable Mike Veale believed the allegations against Heath were “120 per cent genuine”8.

In a statement, Witshire Police said:

In the case of seven individual disclosures, if Sir Edward Heath had been alive today, it has been concluded that he would have been interviewed under caution in order to obtain his account in relation to the allegations made against him. 9

The findings of the report were passed to the Independent Inquiry into Child Sexual Abuse, an inquiry set up by the UK to investigate the many claims made against the establishment.

Her son, Prince Andrew, was is known to have enjoyed the affections of young women at Little St. James.10

This friendship continued long after Prince Andrew became aware was a pedophile11 and he was pictured in Central Park with Epstein shortly after his release from prison0.

He’s also good friends with Kevin Spacey and even let Spacey sit on the Queen’s throne!12

Below he is pictured with Ghislaine Maxwell and a 16-year old Virginia Roberts, a woman who would later accuse Maxwell of recruiting her into an exploitation ring. 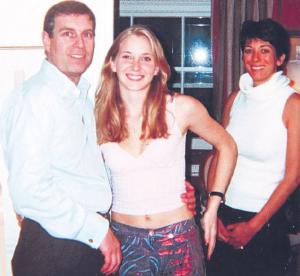 Prince Andrew is so involved he’s even got his own section on this website!

Bonus Round: Holidays for Pedophiles 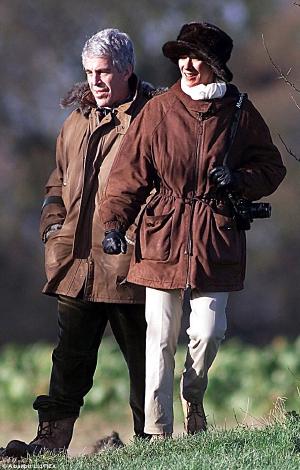 Here’s pedophile Jeffery Epstein & Ghislaine Maxwell having a stroll through her country estate of Sandringham.13

She even let him land his mini-Lolita Express at a Royal Air Force base. 14

Hilary Clinton giving a concession speech having lost the election.

The Queen loves purple. Here’s Barry & Michael in 2016 with the Queen; Michele wore purple especially for her15. Clinton wore purple after her election too16.

It was widely reported on that the Queen wore purple the day after her election defeat to Trump but here’s the interesting bit: the articles and photos about it have been scrubbed off the internet.

Fun Fact: Queen Elizabeth (Peace be Upon Her) 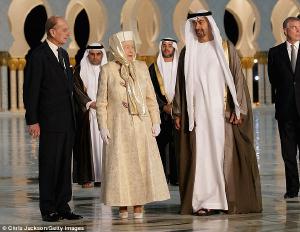 The Queen is a decedent of Fatimah, the offspring of Khadija bint Khuwaylid & Prophet Muhammad17.

Bonus Fun Fact: Khadija bint Khuwaylid was Muhammed’s first wife; she was a wealthy Catholic widow. The illiterate Muhammad supposedly received the Qu’ran in a batcave shorty after their marriage. Mercy & severity indeed!

Sort it Out, Liz

You’ve been surrounded by pedophiles for decades; sort it out.

A message to the British: Your Queen has been surrounded by pedophiles for 80 years. Tell her! I’m sure she’s not involved and knows nothing about it and it’s all a terrible misunderstanding… I’m sure she’s a lovely woman and just a puppet of the Jesuits/Rothschilds/Octogon/insert-other-evil-group-here.