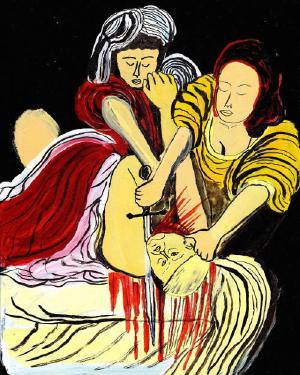 This lively mural depicting a beheading was painted by Arrington de Dionyso, an artist also on display at Comet Ping Pong. It depicts a man, presumed to be Donald Trump, being decapitated.

This seems a strange mural; does it have additional meaning? 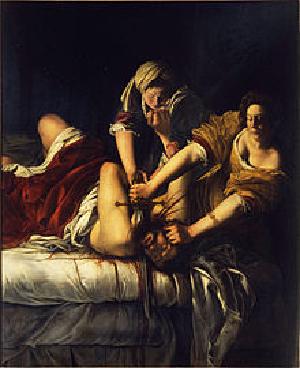 The above picture is Judith Slaying Holofernes (1614–20), painted by Artemisia Gentileschi1; it is clearly the reference image for Dionyso’s mural. It depicts a story from the Book of Judith where a young woman charms and then decapitates Assyrian general Holofernes.

The artist is clearly drawing our attention to the story of Holofernes so let us explore Holoferes further.

The Book of Judith is a deuterocanonical book, included in the Catholic & Orthodox Christian Old Testaments but excluded from Jewish texts. Many consider it to be non-historical.

Judith was a beautiful widow whose town was under siege by Babylonian general Holofernes. Judith and her loyal maid leave their city to kill Holofernes.

Gaining his trust, she is allowed access to his tent one night as he lies in a drunken stupor. She decapitates him, then takes his head back to her fearful countrymen.

The Assyrians, having lost their leader, disperse, and the Israelites are saved.

It could be interpreted as suggesting Donald Trump is a Modern-day Holofernes who is threating the existence of Israel and so must be killed.

Given that Trump is overwhelmingly pro-Israeli, and even moved the US embassy to Jerusalem despite much complaint from his base, the artist’s message seems to ring hollow.

Perhaps the artist is claiming Trump is a Babylonian threat to Israel? Again, such this seems somewhat ridiculous.

The artist came to prominence after his art was featured in Comet Ping. The artist wrote about his experience of the ‘pizzagate conspiracy theory’ and his harassment by the alt-right.

Another one of his lively murals is below; it has severed heads too.

From the interior of Comet Ping Pong 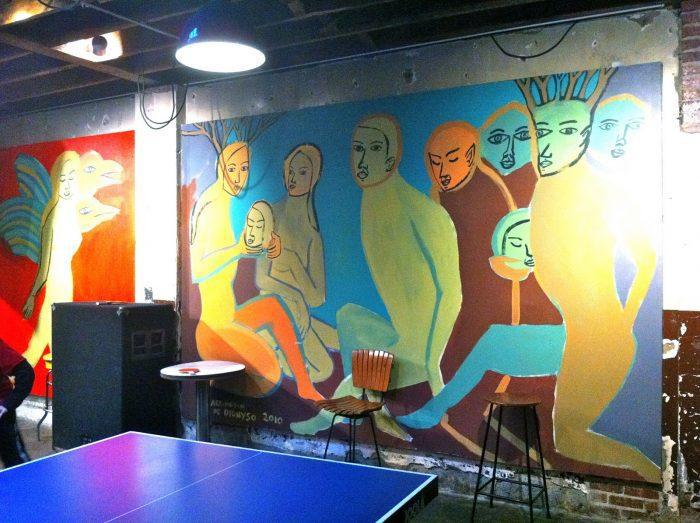