The Wellcome Trust purports to be a biomedical research charity based in London, United Kingdom. It was established in 1936 with legacies from the pharmaceutical magnate Sir Henry Wellcome. It has an endowment of £23.2 billion (2017) making it the second wealthiest charitable foundation in the world, after the Bill & Melinda Gates Foundation.

It is run by the former Director of MI5, Baroness Eliza Manningham-Buller.

There are many connections between it and pedogate; it seems connected to this organised crime network.

Henry Wellcome, the founder, was a high-ranking Freemason who became both a Knight of Malta and closely tied to the Bank of England Freemasons. He donated a portrait of George Washington in Freemason garbs when he died. Wellcome was also a Royal Society Freemason.

Henry Wellcome created a double-edged scheme to run a business and a charity together. The flagship would be a philanthropic body - now the Wellcome Trust - enjoying the image and tax benefits of magnanimous, public-spirited generosity.

Behind this would be a pharmaceutical company, now GSK PLC.

The philanthropic body would promote new ailments and publicise them and his pharmaceutical company would sell the cure.

Our word tabloid refers to the newspapers he created to sell his products1.

Burroughs-Wellcome owned the patent for popers (Amylnitrate) and was the main producer of the drug from the 1960s onwards. The drug was widely used in the gay bars of the 1980s.

It was later found to damage the immune system and cause Kaposi’s Sarcoma.

HIV & AIDs broke out across the Western world in the 1980s. After the disease hit fever pitch, Burroughs-Wellcome PLC quickly discovered AZT, a potential form of treatment for HIV sufferers.

In the present day is makes grants for biomedical research and maintains the Welcome Collection, a very strange museum in London.

Conspiracy theorists claim the Wellcome Trust is behind the Ebola virus & Zika virus. This cannot be confirmed, although they have —- like HIV — found or funded partial cures.

Further speculation has revolved around the Wellcome Trust & Tavistock Institute, not least because they are located within yards of each other in London. Tavistock Institute was central in pushing ‘gay culture’ and poppers; something which netted Burroughs-Wellcome billions (they owned the patent on amyl nitrate, a drug linked to Kaposi’s Sarcoma since 19852.

Londoners joke the ‘Wellcome Collection’, a museum located within the Welcome Trust’s main building on Tavistock Square, should be named the ‘Illuminati Museum’ due to its odd exhibits.

Haven’t quite managed to tie Wellcome & Tavistock Clinics to Pedogate, yet.

In the meantime here’s a picture of the bus blown up in London’s 7 / 7 bombing close to the headquarters of the Wellcome Trust. 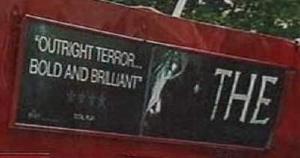