Evie’s Crib was a website run by Tamera Luzzatto which contained many strange references to pedophilia and child trafficking. An archived version is available. It came to light after the Podesta leaks1:

Anons researched Tamera Luzzatto and found she ran a website named Evie’s Crib where she appeared to advertise her children.

Not creepy at all

On this page she seems to advertise ‘Evlyn’:

Evelyn is growing up, soon she will be the Queen of the entire US of A, right now, for a limited time only, you can spend some time with her online, raw and uncut. Take advantage of this now, as in the future she will have the power of life and death over you.

On another she writes about ‘owning’ children:

Jack is owned by Ken Weber and Stephanie Copeland, who live a few blocks from us. Marisa works with Ken at ONE–its all so neat and tidy!

Evie doesn’t know it yet, but she is looking forward to many visits to the farm with cousins Ruby, Emma and Maeve!

The post above is dated March 15, 2009 so predates the leaked emails by six years. This leaked email discusses how Ruby, Emerson, and Maeve will be waiting in the pool at the farm. This email says Maeve is nearly 7 and so would fit for the age of Evie. Who knows what happened to the old Maeve.

Who is Tamera Luzzatto 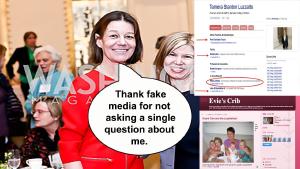 We have a page dedicated to Tamera Luzzatto here as she is a pedogate principle. 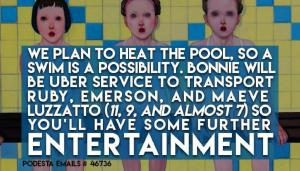 This wealthy well-connected woman had a webpage where she showcased her adopted children and invited grown men to a pool party with children for entertainment.