The British Broadcasting Corporation (BBC) is the state broadcaster in the United Kingdom. In recent years allegations of pedophilia have been made against many of its media personalities.

The BBC has been found to be complicit in this abuse though coverup & inaction.

The BBC went to great lengths to hide the abuse of its former personality, [Jimmy Savile](/pedocrats/jimmy-savile/]. He was found to be a prolific pedophile who abused hundreds of victims, including on BBC premises.

After his death, the BBC dropped an investigation into his abuse for no good reason. It is thought Mark Thompson killed the BBC investigation and then promptly left the BBC. A new Director General would be his fall guy.

Savile’s role was thought to be in procuring victims for the British Establishment.

The timeline makes the coverup clearer:

Former head of Newsnight investigations would later say all those who sought to uncover the abuse of Jimmy Savile were forced out of the BBC.1

Various carvings by Eric Gill adorn the façade of the BBC’s main office building in London. These were created by notorious pedophile Eric Gill and installed in 1933. Eric Gill’s step-daughter, Antoinette Lyons, later wrote a book in which she accuses Gill of sexual abuse. His own diaries reveal he regularly had sex with two of his daughters, his sisters and even the family dog.2

We have an entire section dedicated to the dreadful statue.

In recent years the BBC stands accused of normalizing pedophilia with its output. 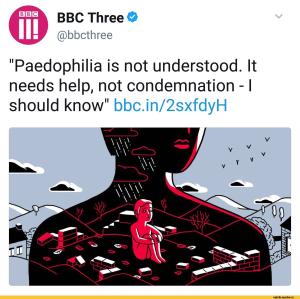