John Podesta's Fingers
The hands of Skippy tell a tale

Meme showing the link between John Podesta and his mangled fingers. 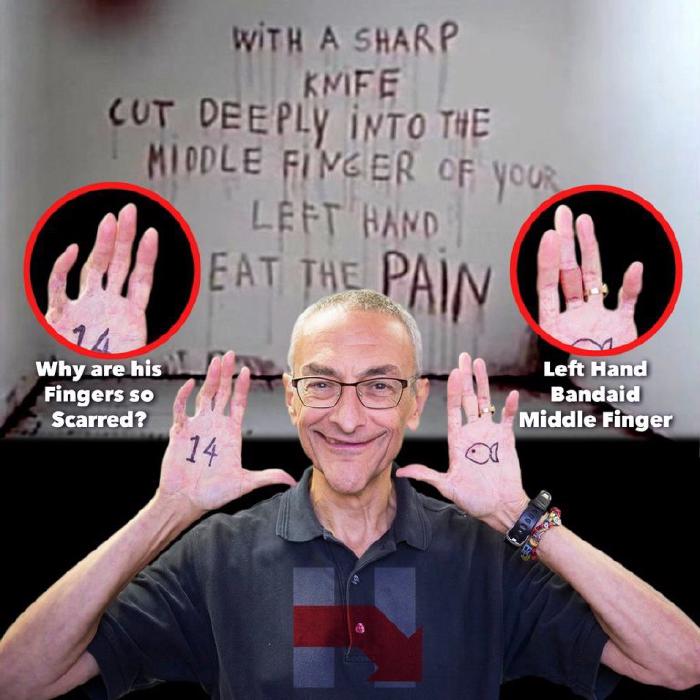 This image was published by Wikileaks as part of their leak of John Podesta’s email account. It is attached to email #15671 and ostensibly concerns Global Goal #14.

The background is taken from a Marina Abramovic ‘Spirit Cooking’ event in 1997.

Superficially it concerns a United Nations sustainability goal however the image can be decoded and linked to Alistair Crowley & Pizzagate.

John & Tony were keen spirit cookers, as confirmed by an email from Abramovic to John Podesta:

As has been discussed elsewhere, Spirit Cooking is a religious practice found in Alistair Crowley’s Thelema.

The numbers & images seem to relate to the Osiris myth. The Osiris story in ancient Egyptian mythology is featured in many esoteric traditions. The god Osiris, a primeval king of Egypt, is killed by his brother his brother Set.

Set cuts his brother into 14 pieces and scatters them through the land, much to the distress of Osiris’ sister, Isis. She finds 13 pieces, puts them together and is able to resurect Osiris. Unfortunately for Osiris, the missing piece of his body is his penis which is eaten by a fish.

The number 14 & picture of a fish are likely to be a reference to this story.

One of Freemasonry’s most closely guarded secrets is The Hand of the Mysteries left. It has different names (and meanings) in other Esoteric traditions (such as Thelema) but the knowledge about what each finger means seems to be only orally recorded.

Abramović’s art mentioned cutting deeply into this finger and Podesta has a plaster on this finger; it seems significant.

The corresponding symbol for this finger — a sun — is has many meanings depending on the esoteric tradition. In Freemasonry the the sun is absolute cosmic power and its center represents knowledge, glory and intuition.

This interpretation is from Albert Pike whose Morals on Dogma is itself questionable; other traditions has the middle finger as Saturn or fate.